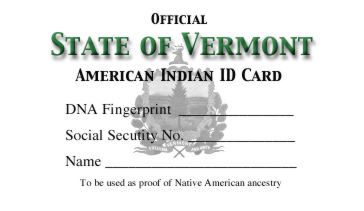 Vermont
My country tis of thee?
(Too bad someone already thought of the yellow star.)

The following response has been received from
Representative Maslack of Poultney, VT:

On August 7, 1999 the Boston Globe reported that a doctoral student had uncovered a dark secret in Vermont's past...

Scientists in the 1920s and '30s had an active eugenics plan to eliminate the state's "degenerate" bloodlines and replenish "old pioneer stock." In a book to be published later this year, Nancy Gallagher details the plan called the "Vermont Eugenics Survey." The 12-year survey, developed by an independent team of social scientists, studied "good" and "bad" families in the state and listed those which it determined needed to be eliminated, Gallagher told The Boston Globe for a story in Saturday's editions. The report was circulated among policymakers at the time and led to the passage of a 1931 sterilization law. The law resulted in the sterilization of several hundred poor, rural Vermonters, Abenaki Indians and others deemed unfit to procreate...

Now, Vermont's Wasichu have gone one step further in proposing that all resident Native Americans be DNA certified as to their heritage:

Introduced by Representative Maslack of Poultney

Referred to Committee on

This bill proposes to authorize the commissioner of health to develop standards and procedures for DNA-HLA testing to identify individuals who are Native Americans.

Q. Could you explain the difference between HLA and DNA testing?.

A. HLA analysis tests antigens found on the surface of the white cells (leukocytes), whereas DNA measures the actual genetic sequences found in the body's nucleated cells, by analyzing the blood's white cells or the mouth's squamous epithelial buccal cells.]

An Act Relating To Dna Testing And Native Americans

It is hereby enacted by the General Assembly of the State of Vermont:

Now, obviously there is always an "I" behind a page such as this...someone who does the hack work. And, usually that "I" is kept hidden...but, as a resident of Vermont and a mixed-blood, non-enrolled Tsalagi I want this man, this elected official, censured and out of the Vermont Legislature.

There can be no quarter here. Help me, help all of The People, to show Vermont that we will not be considered thusly.