An Indigenous Assault on
Fort Snelling
by JS Dill

A very fine and pretty bird of all colors came and sang beside our village. A voice said, "Listen not to him; pay no heed to his song; look not on his colors." He went away.

He came again with finer colors and sweeter songs, and he continued to do so until we heard him, and he led us away to die.

The bird is the big knives - the white man; his songs are his fair words and lying promises; his colors are his paints, the beads and goods he gives for our land.

Woe to us, for the day we hear the big knives' words, we go to our graves....a tale of the Santee Sioux 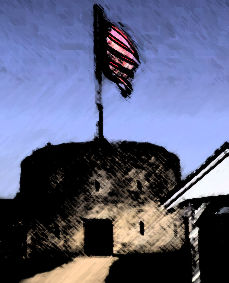 On October 12, 1998, in a daring daylight attack the First Nations Indigenous Resistance (FNIR) struck at Fort Snelling, Minnesota commandeering a " revered, historic 24 star" American flag. The assault was videotaped by the FNIR and a copy delivered to local news stations on the 14th. As certified by the video tape, the attack underwrote the 506 (and counting) years of genocide since the arrival of Columbus on First Nations shores.

Fort Snelling? Why, there?

For a possible answer one must look back in time a bit...And, while it is not my intent to entirely educate you as to the why of this Columbus Day assault, I do hope to provide some pointers.

Fort Snelling had a leading part in what has been termed the "largest mass execution ever to take place in the United States." This, directed by one of America's most revered Presidents - Abraham Lincoln. Perhaps this advice will spur further research?

In 1862 there were approximately 7,000 Santee Sioux living on a Minnesota reservation that could have been described as an elongated rectangle stretching from Lake Traverse in the Northwest to New Elm in the Southwest. This strip was approximately 150 miles long by 10 miles wide. It was all that the Santee had left. All else had been taken by Wasichu.

In return for giving up their land to the whites, the Santee were guaranteed annuity payments, pledged to them by treaty. These payments were to be made up of food, goods and cash. Yet, the payment for 1862 had not come. And it had been a bad year. The People were starving in their own Land while the warehouses of thieving traders bulged with goods and food received yet not distributed to the People. Finally one of the ranking chiefs, Little Crow of the Mdewkantons, confronted those assigned to look over his peoples welfare:

We have waited a long time. The money is ours, but we cannot get it. We have no food, but here are these stores filled with food. We ask that you, the agent, make some arrangement by which we can get food from the stores, or else we may take our own way to keep ourselves from starving. When men are hungry they help themselves.

So far as I am concerned, if they are hungry, let them eat grass or their own dung.

You have heard of the "proverbial straw?" The dung statement was that straw.

A short time later young Santee warriors, in violation of their Elders dictates, killed three white men and two of their woman. Little Crow counseled against further attacks because he "knew" the whites were many and would prevail if Santee attacks continued. He was overruled and a war erupted...

By the wars' end nearly forty-thousand settlers became refugees and estimates of the death toll ranged from four hundred to two thousand. The Santee were ravaged and, eventually, almost 400 Santee were captured and classified as "instigating, participating" suspects. Some of these prisoners were kept at Mankato. Some at Fort Snelling.

After the resultant trials 306 Santee were sentenced to "hang for murder, rape, or taking part in a battle." 16 were given prison terms for robbery. Approximately 1,700 Santee women and children were marched to, and detained at, Fort Snelling.

Appeals from white religious leaders persuaded then President Lincoln to declare that only 36 of the convicted were to be hanged for murder and rape...the others were declared "prisoners of war." A special scaffold was constructed so that all the traps would drop by cutting one rope.

Will the Tears of the People never end?:

As the ropes were placed around their necks, they began to wail their mournful discordant death song again. The muslin caps are rolled down over their faces, cutting off their final view of this world. Their singing grows louder, and some call out their names and the names of their friends who will die with them.

Their bodies swayed to and fro and their every limb seemed to be keeping time...the most touching scene was their attempt to graps each other's hands, fettered as they were. They were very close to each other, and many succeeded. Three or four in a row were hand in hand, and all hands swaying up and down with the rise and fall of their voices. One old man reached out to each of his sides, but could not grasp a hand...

So...now you know the "why" of Fort Snelling. Possibly.

Where will the First Nations Indigenous Resistance strike next?