The Manipulation of
Myrtle Poor Bear...

Myrtle Poor Bear, an unbalanced Lakota woman, was held incommunicado and intimidated systematically by agents Price and Wood for over a month, thus induced to provide false affidavits and testimony against Peltier and Richard Marshall. Poor Bear later recanted everything and described the process by which her perjury had been obtained:

The defense suggested that Judge Benson attempt to recognize a close acquaintance at a half mile's distance through such a low-powered scope, but his honor both declined the invitation and refused to allow the jury to make a similar attempt. James R. Hall, an experienced outdoorsman and manager of a shop specializing in firearms, rifle scopes, and the like, was brought in by the defense to conduct a test in the presence of both a WKLDOC attorney and an FBI agent. Hall subsequently testified that using a scope virtually identical to the one claimed by SA Coward, he had failed to recognize an acquaintance who was standing still and facing him at one half-mile on a crisp, overcast, 38 day with minimal mirage factor; Hall "could not determine any facial features [emphasis added]" of his friend through such a scope at the required distance, even under ideal conditions. Still, the eyewitness i.d." of Peltier by an agent had gone to the jury, while much of the defense counter-argument had not. With that, the prosecution's case closed.

The defense attempted to move to impeach the entire manner in which the FBI and prosecution had obtained the circumstantial evidence presented against Peltier (no concrete evidence of his guilt ever having been offered in the government's case), thus destroying the credibility of the evidence itself. The key to this strategy lay in calling Myrtle Poor Bear whom Hultman had once again declined to put on the stand and whose supposed "eyewitness" accounts of Peltier's involvement in the deaths of Coler and Williams had resulted in his extradition from Canada. Judge Benson refused to allow her to be called by the defense, arguing (as did Hultman and Sikma) that any testimony she might offer concerning her earlier affidavits and the manner in which they had been obtained by the BureauŃwould be "irrelevant, irresponsible and immaterial, given that it would not pertain "directly to the events of June 26, 1975." Benson, however, agreed to hold an "offer of proof" hearing, out of the presence of the jury, in which the defense could attempt to demonstrate why Poor Bear should be allowed to testify, and how this would "shed light" on the nature of the government's case. Elliott Taikeff examined the witness during the hearing:

Taikeff: Do you know a person named Leonard Peltier?

Taikeff: Did you ever see him in your life?

Taikeff: Were you ever at the Jumping Bull area on the Pine Ridge Reservation?

Taikeff: Did you ever live with Leonard Peltier?

Taikeff: Last night did you tell me you were frightened?

Taikeff: What were you frightened of?

Poor Bear: I don't know. I am scared of the Government.

Judge Benson: What was the answer?

Taikeff: I don't know. I am scared of the Government.

Taikeff: Did anyone from the Government ever say anything to make you afraid?

Taikeff: What did they say about Anna Mae?

Poor Bear: Oh, they just would talk about that time she died.

Taikeff: What did they say about it? You can tell the judge, it's all right (Defense Counsel confer).

Taikeff: May counsel approach, your honor?

Judge Benson: You may.

Taikeff: (At the bench) Your honor, I would ask that your honor briefly advise her that she is under oath and you want to hear what she has to say providing it is the truth and that she has nothing to fear by telling the truth...She is very frightened, Your Honor. She told me last night she is afraid she is going to be killed, and that is why she is so upset at this particular moment.

Taikeff: What did [SAs David Price and William Wood] tell you about the American Indian Movement?

Poor Bear: They told me they were going to kill me.

Taikeff: Did Mr. Wood ever say anything about the subject of getting away with killing people?

Poor Bear: I think he did.

Taikeff: Do you recall what he said?

Poor Bear: He said that they could get away with killing because they were agents.

Crooks: Has anybody [meaning AIM] threatened to do anything to you if you did not change your story?

Crooks: Nobody even suggested it?

Crooks: Why were you signing these affidavits [incriminating Peltier]?

Crooks: Well, did [SA] Bill Wood threaten to harm you or hurt you if you didn't sign?

Crooks: Can you answer that question?

After a 45 minute recess the hearing resumed.

Taikeff: Your honor, I would like the record to reflect a 45 minute pause measured by the courtroom clock between the last question and the following question.

Crooks: Can you answer the question, Myrtle?

Poor Bear: I was forced to sign both [sic there were three] of those papers.

Poor Bear: They said my family members were going to be hurt if I didn't do it. By [SAs] David Price and Bill Wood...

In redirect examination, Taikeff followed up:

Taikeff: Do you remember Mr. Crooks, that's the man with the dark glasses, asked you a couple of times this afternoon about whether you were threatened by Agent Price or Agent Wood..?

Taikeff: Why did you remain silent and not answer his question?

Poor Bear: Because they [the FBI] did threaten me.

Taikeff: Miss Poor Bear, will you please tell us whether Agent Price ever threatened you?

Taikeff: What did he say to you?

Poor Bear: He told me they were going to plan everything out and if I didn't do it I was going to get hurt.

Taikeff: Did anybody else ever say that to you from the FBI?

This testimony corresponded well with a sworn statement Poor Bear had made in Canada on May 11, 1977, that:

I remember Dave Price and Bill Wood, the two FBI agents, telling me about Anna Mae Aquash. Dave described her body to me. He said from what he had heard she had been burnt and her clothes put back on her and that after her clothes were put back on she was shot...he showed me pictures of the body and said that if I don't cooperate this is what may happen to me...the two FBI agents constantly reminded me of what happened to Anna Mae Aquash. And every so often the FBI agents showed me pictures of Anna Mae Aquash's body and I was really scared...Bill Wood said that all the way along he knew that the body found on Pine Ridge was Anna Mae's body but that he had had her hands severed from her body and sent to Washington for identification and to verify his own observations. 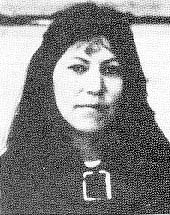