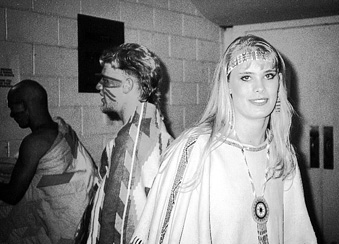 Use of Racist Mascot Stopped
In Bennett County,
South Dakota

History tells the tale of genocide against the Lakota. In Pine Ridge Reservation there is a question of Apartheid on the Reservation. In the small "rural" town of Martin SD, located on the reservation, there is growing evidence that Apartheid exists.

Within this racially segregated town, a 60 year old Indian mascot touched and inflamed young members of the Indian community. Racial effigies such as the "Chief Wahoo" Cleveland Indian mascot were being burned across the country. Back in Martin SD, one September day in 1997, another Indian mascot ended.

Someone once said that "liberation is based on love for the people and for the sacred mother earth." A liberation occurred in 1973 at Wounded Knee SD by Lakota's and their American Indian Movement supporters. Opponents of AIM say that it was an illegal occupation. But since then, liberation has held the people strong in the road toward Sovereignty and Nationhood.

As you drive through the town of Martin, you can see that the town is populated predominately by "wasicu". On the eastern edge of town, there is a tiny hamlet called "Sunrise Housing", a HUD project where Lakota people reside. Often, Indians get the end of a SD gun barrel pointed at them. This is normal to the Lakota people living there. Several years ago, Twin sisters Corrie and Sarah Trimble launched an awareness campaign to point to the overlooked mascot attraction at the High School in Martin. They received a backlash from fellow students, being ostracized and stigmatized, labelled as "troublemakers." But they continued their efforts. The Lakota Student Alliance joined them later on but kept the awareness of a symbolic "Indian Princess" ceremony in the Lakota community.

Through research, the Lakota Student Alliance documented some of the more recent activity occurring in Apartheid-torn Martin. In the fall of 1997, the Homecoming Committee, which we believe was created to circumvent any Indian protests, decided to stop their demeaning caricature. Lakota Student Alliance members are pleased with the decision.

The following chronicle could be considered a point of hope for the future generations.

Sept. 1995 - The American Indian Movement and the Lakota Student Alliance join in support of the Trimble sisters efforts to eliminate 58 year old coronation. A small gathering of around 35 Indians and non-Indians arrive at the coronation in peaceful protest. Non Indian rancher tells protesters "this is white man's sacred ground."

May 18, 1996 - A 16-year-old Lakota Youth is arrested by officers of the Bennett Co. Sheriffs Department. Youth turns out to be the nephew of slain Lakota man Jerry Marshall. Circumstances for his arrest are unclear. Youth reports he was threatened while officer held gun to his head. "One wrong move boy, and I'll blow you away. I wish I could put 15 rounds into you right now," the officer told the boy.

July 4, 1996 - Three Lakota Inmates at the Bennett Co. jail launch hunger strike for what they claim as "inhumane" treatment and jail conditions in Martin SD. Inmates are also threatened with harm by police. Inmates release 23 complaints to Federal Investigators and Human Rights groups.

Sept. 6, 1996 - BCHS Superintendent Chris Anderson meets with tribal members and calls them "outsiders" at the meeting. Anderson said he was only reflecting the views of the school board members and alumni when he says the school will not change its homecoming coronation ceremony. "If you came here to eliminate the ceremony, you're talking to the wrong people" stated Anderson.

Your opinion regarding this site?