Statement of the Lakota Student Alliance Regarding
Mt. Rushmore and the Black Hills
December 2, 1997

Mt. Rushmore is a Shrine of HYPOCRISY!

Mt. Rushmore is a desecration of our Sacred Mother Earth and a slap in the face of Lakota peoples everywhere. Documents have stated that Mt. Rushmore in the Black Hills of South Dakota is a shrine to democracy. As you read further, you will find that American was founded on the blood and lives of Indian peoples. We question what type of democracy this shrine represents.

The four faces carved on stolen Indian lands supposedly represent the four most notable presidents of the United States. With their ideals and values defined through the study of Iroquois society, America's founding fathers are indebted to the Lakota and all Indian peoples for their mere existence. But, in the Sacred Black Hills (our church, our synagogue, our temple) those presidents carved on that granite rock were more than mere democratic deviants.

The founding fathers on that rock shared common characteristics. All four valued white supremacy and promoted the extirpation of Indian society. The United States' founding fathers were staunchly anti-Indian advocates in that at one time or another, all four provided for genocide against Indian peoples of this hemisphere.

In 1779, George Washington instructed Major General John Sullivan to attack Iroquois people. Washington stated, "lay waste all the settlements around...that the country may not be merely overrun, but destroyed". In the course of the carnage and annihilation of Indian people, Washington also instructed his general not "listen to any overture of peace before the total ruin of their settlements is effected". (Stannard, David E. AMERICAN HOLOCAUST. New York: Oxford University Press, 1992. pp. 118-121.)

In 1783, Washington's anti-Indian sentiments were apparent in his comparisons of Indians with wolves: "Both being beast of prey, tho' they differ in shape", he said. George Washington's policies of extermination were realized in his troops behaviors following a defeat. Troops would skin the bodies of Iroquois "from the hips downward to make boot tops or leggings". Indians who survived the attacks later re-named the nation's first president as "Town Destroyer". Approximately 28 of 30 Seneca towns had been destroyed within a five year period. (Ibid)

In 1807, Thomas Jefferson instructed his War Department that, should any Indians resist against America stealing Indian lands, the Indian resistance must be met with "the hatchet". Jefferson continued, "And...if ever we are constrained to lift the hatchet against any tribe, " he wrote, "we will never lay it down till that tribe is exterminated, or is driven beyond the Mississippi." Jefferson, the slave owner, continued, "in war, they will kill some of us; we shall destroy all of them". (Ibid)

In 1812, Jefferson said that American was obliged to push the backward Indians "with the beasts of the forests into the Stony Mountains". One year later Jefferson continued anti-Indian statements by adding that America must "pursue [the Indians] to extermination, or drive them to new seats beyond our reach". (Ibid)

In 1862, President Abraham Lincoln ordered the execution, by hanging, of 38 Dakota Sioux prisoners in Mankato, Minnesota. Most of those executed were holy men or political leaders of their camps. None of them were responsible for committing the crimes they were accused of. Coined as the Largest Mass Execution in U.S. History. (Brown, Dee. BURY MY HEART AT WOUNDED KNEE. New York: Holt, Rinehart, Winston, 1970. pp. 59-61)

The fourth face you see on that "Stony Mountain" is America's first twentieth century president, alleged American hero, and Nobel peace prize recipient, Theodore Roosevelt. This Indian fighter firmly grasped the notion of Manifest Destiny saying that America's extermination of the Indians and thefts our their lands "was ultimately beneficial as it was inevitable". Roosevelt once said, "I don't go so far as to think that the only good Indians are dead Indians, but I believe nine out of ten are, and I shouldn't like to inquire too closely into the case of the tenth". (Stannard, Op.Cit.)

The apathy displayed by these founding fathers symbolize the demoralization related to racial superiority. Scholars point toward this racial polarization as evidence of the existence of Eugenics.

Eugenics is a new term for an old phenomena which asserts that Indian people should be exterminated because they are an inferior race of people. Jefferson's suggestion to pursue the Indians to extermination fits well into the eugenistic vision. In David Stannard's study American Holocaust, he writes: "had these same words been enunciated by a German leader in 1939, and directed at European Jews, they would be engraved in modern memory. Since they were uttered by one of America's founding fathers, however...they conveniently have become lost to most historians in their insistent celebration of Jefferson's wisdom and humanity." Roosevelt feared that American upper classes were being replaced by the "unrestricted breeding" of inferior racial stocks, the "utterly shiftless", and the "worthless" (Ibid)

The impossibility of persuading those four presidents to change their belief is as realistic as the impossibility that Indian peoples will relinquish our determination in seeking the return and restoration of the sacred Black Hills. So long as the last Lakota is standing and alive, the consciousness of America will be the primary target in the Lakota struggle to regain the spiritual center: The Black Hills.

The Black Hills Are Not For Sale! 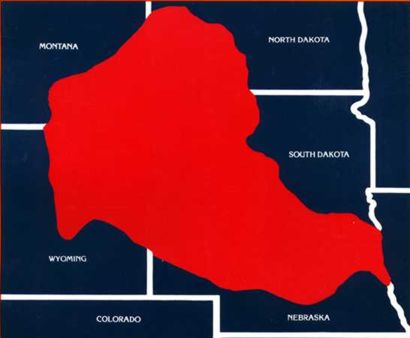 In 1851, an agreement as reached by delegates of traditional Lakota peoples and the United States of America which promised large areas of land for which the Lakota peoples would roam freely upon. After violating stipulations in the treaty, the U.S. sought another accord with both parties promising to reserve lands for the Lakota peoples. The second treaty, known as the 1868 Ft. Laramie Treaty, required 3/4 of the adult male population of the Lakota Nation to vote in agreement upon relinquishing or selling all lands provided in this document.

This treaty also promised to punish whosoever would break the trust. But the treaty was again violated by the U.S. through repetitive attacks on Lakota camps in the Little Bighorn Battle of 1876 and in the Wounded Knee Massacre in 1890.

In 1877, the Manypenny Commission Treaty agreement was made in total violation of Article 12 of the 1868 Treaty earlier declaring 3/4 majority vote required in order to further cede any portions of lands to the U.S.

In 1980, the U.S. awarded monetary compensation of the land theft. The blatant violations of their own laws against Lakota peoples were what they called "dishonorable dealings" in the history of America. The Lakota Treaty Advocates and Supporters nationwide unilaterally rejected the money. Instead, the desire to achieve the return of stolen lands grew stronger. The land has never been legally sold.

Later came the episode with a millionaire businessman from California who promised to get the lands returned to the Lakota in exchange for a status as "Special Chief". Turned out he was unable to prove his ancestry. Coincidentally, his action struck a major blow at the solidarity of the Lakota Treaty advocates, an issue that needs to be addressed now.

The only offer we will accept is the return of the land guaranteed to us in the treaty. Though Pine Ridge still ranks lowest in the American poverty category, we still refuse the money. Spiritual poverty is what we fear more than anything.

We appeal with urgency to all tribes affected by the 1868 treaty to consider establishing a National Land Commission. We also request tribes to study and enact legislation appropriate with the 20 Point Proposal introduced in Washington during the 1972 Trail of Broken Treaties Caravan. We also demand all tribal officials to restore treaty making between Traditional Governments and U.S. Congress. And, finally, we ask all tribes to consider adoption of the 1974 Declaration of Continuing Independence (enacted at Mobridge, South Dakota during the International Indian Treaty Conference), as the first step toward true Sovereignty.

"and all treaties made...under the authority of the United States, shall be the supreme Law of the Land..." Article VI, U.S. Constitution