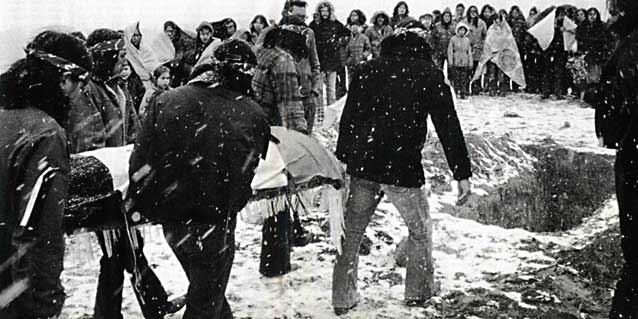 We might as well learn to
bury each other...

Sioux elders say the winds always howl when the body of a murder victim is moved. During the traditional wake and funeral given Anna Mae Aquash the week-end of March 12, 1976, a storm peaked, sending 30-mile-per-hour winds blasting across the desolate fields and shaking the rickety Jumping Bull Hall where the wake was being held. The unseasonal thaw that three weeks before had led to the discovery of Anna Mae's body had given way to bitter cold. The corpse awaited its second burial bound in blankets and robes, resting on a log pole bier inside a canvas-covered teepee near the rickety building known as Jumping Bull Hall. Indian youths took axes to the government-supplied coffin and burned it in a bonfire outside.

The weather worsened and the mourners huddled around two wood stoves improvised from 50-gallon drums, which provided slight comfort against the winds tearing through the cardboard sheathing of the hall. When it seemed the entire building might collapse, the funeral bier was moved into the one-room cabin where Dennis Banks had lived the previous summer, and the mourners moved into the Jumping Bull residence, site of the bloody FBI-Indian shoot-out eight months before. Many of those present were elderly Sioux women, dark shawls framing their lined faces: they had witnessed many funerals in the last few years.

Above the funeral bier hung the AIM flag and a photocopy of a newspaper picture showing Anna Mae Aquash chained waist-to-waist with Kamook Banks after their arrest in Oregon. Sacred flags of yellow, black, white and red, representing the four winds, hung around the bier. On top of it were the presents of cigarettes, tobacco, beaded clothes and moccasins that Anna Mae would take to the other world.

It was snowing heavily by the time Anna Mae's sisters, Mary Lafford and Rebecca Julian, arrived in Oglala on Sunday, March 13. They watched in stunned silence as additional prayers were offered by the Sioux medicine men. To the sound of the drum, the chants and the sobbing wails, six young Indian men wearing red headbands stepped forward, lifted the bier and carried it to the rear of an open station wagon outside. The funeral cortege of 75 cars and pick-up trucks followed the station wagon to the grave site on Wallace Little's ranch a few miles east of Highway 18. The graves on the hill-top plot already told of the tragedies of life and death on Pine Ridge. Two years before, the first grave had been dug for Little's son, killed by a white man in Florida. In June, 1975, the second grave was dug for Joe Stuntz, killed in the shooting on the Jumping Bull land. A few months later another of Little's sons was buried there, after being kicked to death in Oglala in a fight over a pair of spurs. The fourth grave, for Anna Mae Aquash, had been excavated the night before by four young Oglala women, one of whom had lay down in the hole to measure it. "We might as well learn to bury each other," Roslyn Jumping Bull had told the other women, "because nobody else will help us."

The sacred colors were tied to stakes at each corner of the grave. The wind whipped the upside-down American flag that hung next to the two medicine men praying to the four winds in the Sioux way. The mourners threw down presents to be entombed with the dead woman. Gesturing with the sacred pipe and the bundles of sage, the medicine men directed the pall bearers to pick up their shovels.

Back at the Jumping Bull house the colorful knitted AIM flag was given to Mary Lafford to take back to Mary Ellen Barlow in New Brunswick. Anna Mae's two young daughters had been kept home by their father, Jake Maloney. Nogeeshik Aquash was not at the funeral, nor were any of the AIM leaders Anna Mae had been close to during her life. Darrelle Butler was in a South Dakota jail, charged with the murders of the two FBI agents. Leonard Peltier was in a Canadian jail, fighting extradition to South Dakota on the same charge. Vernon Bellecourt phones Rapid City several times from Minneapolis saying he would attend the funeral, but did not. Russell Means, his brother and friends were attending a basketball game a few miles away but they came to neither the wake or the funeral. Dennis Banks was still in California fighting extradition to South Dakota where a jail term awaited him for his participation in the Custer confrontation of 1973. Although he had called Mary Lafford to offer his condolences it was several days before he declared the day of Anna Mae's funeral a national Indian day of mourning.

The sluggish response to Anna Mae's funeral revealed the extent to which the rumor campaign linking Anna Mae to the FBI had been effective. The widespread suspicion about her accounts in large part for the delayed reaction from AIM leaders and the WKLDOC support group and for the difficulties faced by Anna Mae's personal friends when they sought the exhumation of her body and the second autopsy, which revealed she had been murdered. The paralysed response of AIM to the Aquash tragedy was in part due to the belief that she might have been killed by a member of the organization. Dennis Banks reportedly initiated an investigation and then called it off because, in his own words, "If AIM was involved, it would crush our movement." This reluctance to seek the truth carried its own price, however.

Among some AIM members, particularly the women who had been Anna Mae's friends, the death created a desire to get as far from AIM as possible. Some felt it was dangerous to defend the dead woman, fearing that anyone who did so would be labelled an informer. Thus the already battered movement suffered another sever blow. According to Paula Giese, "Anna Mae's death did not destroy AIM. What it did was show that AIM was dead." While this harsh opinion is not shared by all AIM members or supporters, the Aquash death marked a very low point in the organization's affairs.

The suspicion remains that Anna Mae Aquash was killed by an AIM member, who was convinced she was an informer and murdered her in a desperate attempt to stem the flow of information to the FBI and protect the hunted leaders. There was no precedent for such treatment of informers in the organization, but according to one observer, "If ever there was to be a first, the time was ripe for it."

The Life and Death of Anna Mae Aquash, Johanna Brand...1978

Relinquishing A Legacy of Hatred,
Embracing Respect for All Life
Conversations with
Dino Butler©


This site is maintained by JS Dill.

Please provide an opinion as to this site...