[This article appeared in September '98 issue of The Circle and is reprinted here with permission.] 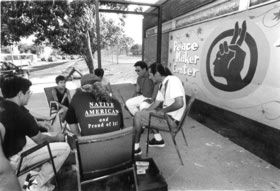 "When we started, there were just things like quilt sewing groups and people that gave us old clothes and food," says Mary Jane Wilson (Ojibwe), one of the local Minneapolis founders of the American Indian Movement, AIM. "It wasn't even enough to count as a band-aid."

Wilson beams with pride as she swishes her arm across her cubicle space. Wilson is the family stability worker of ICWA, the Indian Child Welfare Act office, located in the Minneapolis American Indian Center.

In August, AIM celebrated it's 30th Anniversary at its annual Pipestone Sundance, in Pipestone, Minnesota. While mainstream press continues to focus on the more glorified days of AIM as gun toting Wounded Knee warriors, or their important international indigenous work (AIM has one vote in the U.N. World Court) it would be easy to get the impression that AIM members have forgotten their Minneapolis roots.

Back at home base, some may argue that AIM leadership is a little too quick to take responsibility for community jewels, such as the success of local blues-rock band, Indigenous. But AIM's critics, friends, foes and zealot followers alike agree AIM has altered the Minneapolis Native American scene. 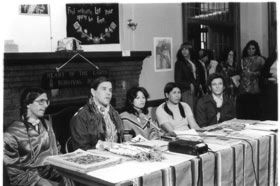 Now, we call it counseling, group therapy or even grassroots organizing, but when Mary Jane Wilson gathered with other urban Native women in the mid-60's to discuss their problemsshe thought they were just talking. They were concerned about the lack of services available to their families, their children's education, and imprisoned friends and relatives. Around the same time, Clyde and Vernon Bellecourt (Ojibwe) and Dennis Banks (Ojibwe) were serving time in Stillwater Correctional Facility in Stillwater, Minnesota. When Clyde was put into solitary confinement, he found himself paired up with a social worker, James Donahue, who urged him to explore his Native American heritage as a source of personal and potentially collective strength. Clyde did, and took some of his fellow prison-mates along for the journey.

"We just knew we had to do something," says Wilson. The American Indian Movement was born or, as some prefer to say with respect to past centuries of struggle, resurrected.

At first, AIM focused on pressuring "War on Poverty" bureaucrats to do right by Native Americans. After a couple years of sit-ins, AIM decided to add another facet to their approach. In 1971, AIM vowed to build its own Native oriented organizations which would rely on cultural and spiritual beliefs to address three main areas of concern: education, health, and police brutality.

Today organizations with AIM roots have sprouted up across the city, especially in south Minneapolis. Mary Jane Wilson remembers the days when she and Clyde would "kidnap" children" i.e. take them back to their original homes. If the family of origin was dysfunctional, they would address their issues in a culturally appropriate manner.

Clyde Bellecourt remembers such days as well. He also believes the greatest local accomplishment of AIM is The Heart of the Earth Survival School, an alternative culturally-based K

Many educational opportunities are also available through the American Indian Opportunities Industrial Center (AIOIC). In addition to quite a few other services, such as GED classes and post-secondary opportunities, AIOIC offers training for living wage jobs. AIOIC receives a good deal of foundation grants and corporate funds from the likes of Honeywell and 3M, who as Clyde puts it, "Made their money off the resources of Indian people and their land."

The Minneapolis Indian Health Board (IHB) focuses on the Phillips community and its 5,000 Native American residents. For example, according to Administrative Assistant, Nuala Kernan, IHB works to prevent and treats patients with diabetes and high blood pressure. It has a lead abatement program which does general education work on the effects of lead paint in addition to screening for and treating children with lead poisoning. IHB also has three Native American women who serve as community outreach workers; knocking on pregnant women's doors to get them to come in for prenatal work, reminding people to take their children in for shots so they can attend school this fall, and bringing older women in for mammograms.

Of course, everyone is familiar with the AIM patrol, even Police Chief Robert Olsen who was given a tour by AIM members of all the hot drug spots in the Phillips area. Police brutality still occurs, such as the stuffing of two Native Americans into a trunk several years ago, but it is somewhat less common.

But the AIM patrol can't protect Native Americans once they're brought inside city hall. Which is why, in 1970 AIM leaders went to local law schools and asked young attorneys-to-be for help. After a few students came forward, the Legal Rights Center was formed and has since assisted over 30,000 people. "I once met an American Indian man in prison for stealing a loaf of bread and some baloney," says Wilson, one of the people who went to the law students asking for assistance, "Our men may still be put into prison today, but at least its not as likely they will be imprisoned for just waking up outside."

Some say AIM has mellowed. Maybe, says Mary Jane Wilson, it's because, "We used to be like a herd of buffalo. Something would happen and we'd all show up in our war ponies, with all of our red ribbons and buttons, and we'd solve the problem... That spirit is still here, it is in the number of resources the community has when they need them."

There are many other local organizations that can trace their roots to AIM, from Migizi communications to the first Native American Legion Post, #419. AIM has branched out into other areas as well, from cultivating an organic farm at the Minnesota Zoo to taking a stance alongside EarthFirst!, a group which emulates AIM principles, to stop the re-route of highway 55 (Hiawatha Avenue) through sacred tribal lands.