"YOU ARE A FAG GO KILLYOURSELF YOU DRUNK FU**IN INDIAN PEICE OF SHIT WE TOOK YOUR LAND WE TOOK YOUR WOMEN YOU CAN'T DO SHIT BUT HIDE ON THE FU**ING RESERVATION" ...kupono@aol.com

Lately, I have been reminded by a number of AOL subscribers that, within the realm of AOL, there resides a strong, caring Native American community. Each time I am reminded of this I ask why "they" have not forced AOL to deal with the racist message you are about to read. To my query there has been no positive response...

Interesting enough, I have heard from another of the AOL bureaucrats...his advice is below...

You have a web site, http://www.dickshovel.com/aib.html that is advocating sending me feedback regarding AOL policy. I wasn't aware for the longest time, where the feedback was originating, and I'm concerned because within the content of most of the messages, I had no idea to what the sender was referring.

Please remove my name from the list of people to whom you are sending mail. I am going to forward your web site information to our legal department so we can better address your concerns.

To Which I responded:

This will be done...and your advice will be added to the site which was initiated because of AOL's failure to respond to a racist "Instant Message."

Another Response From AOL

To: Jordan S. Dill
From: AOL InterNIC Technical Contact
Subject: Re: Your "You will be held accountable" web site
Date: June 29 1997

While I can appreciate your opinion regarding Mattel's release of a native American Indian "Barbie" doll, I must take exception to the fact that your web site (http://www.dickshovel.com/aib.html) directs complaints to my address. I have now received several dozen pieces of e-mail as a result of your action. Please remove my address from your script immediately. If you wish to express your opinion about America Online's policies, please direct them to our President's office at 1 703/448-8700. Any further mail sent to this address from your feedback web script will be regarded as willfull harassment and will be reported to your Internet provider...

To Which I responded:

This will be done...and your advice will be added to the site which was initiated because of AOL's failure to respond to a racist "Instant Message."

It's Barbie® as an American Indian caring for her cousin, Baby Blue FeatherTM. This Collector Edition Barbie® wears a tan buckskin-like dress with matching boots. The tiny papoose she carries has a "buckskin" headband and diaper and comes with a matching backpack. Children will love the magical story Barbie® tells. From the American Stories SeriesTM, this very special Barbie® doll comes with her own historical storybook, so she's educational as well as fun. 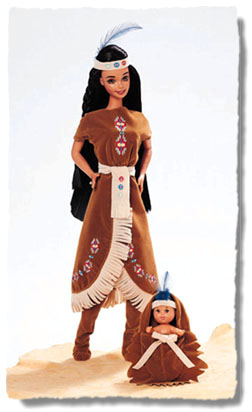 Wasichu continues to assault the First Nations as evidenced by the message at the top of this page... the recipient of this message - an AOL subscriber - of Chippewa/Odawa descent, has repeatedly requested that AOL address the AOL subscriber who sent him the "Instant Message." The message was received while logged-on to an AOL Chat Group. Repeated attempts to get AOL to address this message have been ignored. AOL refuses to provide advice as to what action they have taken and the account [kupono@aol.com] remains active.

Then, on top of this, Mattel Corporation has the GALL to market an "American Indian caring for her cousin." Can anyone see the irony in this?

Two American icons, AOL and Mattel...One protecting a racist speaking his "truth" and the "other," well, the other attempting to profit on the backs of a People who every day face the degradating assault of Wasichu...